My Favorite RiffTrax Movies for Halloween 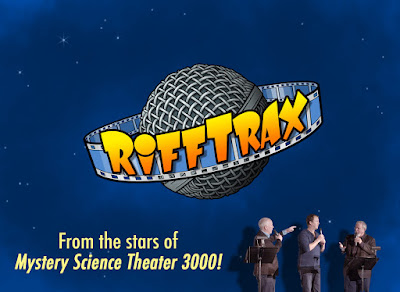 As I’ve mentioned before, I’m a big fan of RiffTrax, the team (including some former members of Mystery Science Theater 3000) who turn bad movies good by making fun of them. I watch RiffTrax movies just about weekly. But today I want to tell you about my favorite Halloween-themed RiffTrax movies!

In no particular order, they are:

Tourist Trap. I find this one genuinely scary, and with a few actual actors, including Chuck Connors! Having said that, it definitely deserves some teasing, and RiffTrax has that covered.

Troll 2. It’s not a sequel to “Troll,” the creatures in the movie aren’t trolls (they’re goblins), and nobody in this thing is an actor. I came to appreciate this stinker after seeing Best Worst Movie, an excellent documentary about Troll 2’s cult following. Though the writing is bad and the acting is bad, Troll 2 is never boring.

Plan 9 From Outer Space. This is possibly my favorite riffed movie of all. Plan 9 is so entertainingly, over-the-top bad on its own that it’s fun to watch, but the RiffTrax crew adds another dimension. I watch this one several times a year. It’s also the first “RiffTrax Live” presentation, where the gang riffs films live in front of an audience and transmits it at the same time to theaters all over the US.

House on Haunted Hill. I love the RiffTrax Live presentation of this, the Vincent Price version of House on Haunted Hill. This, for me, is one of the things movie riffing is best at—taking a movie that on its own is charming but a little slow, and adding some more interest to it. Some of the effects in this film are amusingly bad, but Vincent Price is perfect as always.

Manos: the Hands of Fate. This was riffed before on Mystery Science Theater 3000, and then on RiffTrax, but my favorite is the RiffTrax Live presentation. I would fall asleep trying to watch this film on its own, but in the hands of RiffTrax, it’s wonderful. (Dance, Torgo, dance!)

Birdemic. This one is special in the same way Plan 9 is; it’s enjoyably horrible on its own, but the RiffTrax Live riffing takes it to a new level of fun. Bad (or should we say “non”) actors, bad story, and visual effects that will make your eyes bleed add up to a lot of laughs.