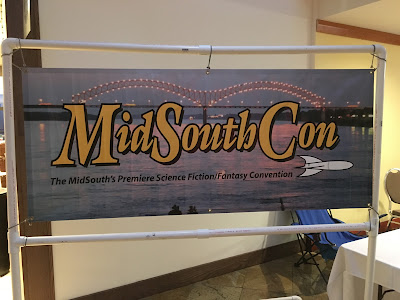 As I do most years, I’m attending Midsouthcon again this weekend. (If you are too, let me know so I can say hi!) Mike Resnick is one of the guests of honor, and I really hope I get to meet him.

Here’s how the first day of the con went for me.

I kicked off the con by playing an RPG in the very first gaming slot (2pm Friday). The game was one I'd been wanting to try: Masks: A New Generation by Magpie Games. It uses the Apocalypse World engine that I liked so much in our Dungeon World adventure at last year's Midsouthcon.


We spent at least half the time crafting our characters and their relationships and team dynamics, which seems in line with a lot of Powered by the Apocalypse games. I felt an affinity for the Janus playbook, the one our GM Jesse likened to a Spider-Man type, burdened with a lot of secret identity conflict. I used this to create Melting Pot, a political-minded (and patriotically-dressed) hero who is active in student government and has the ability to melt into a liquidy goo and also take on the properties of anything he touches. The last hour of our adventure happened at a place I chose--a women's rally--where the Greek god Dionysus showed up to turn things into a wild drunken party. 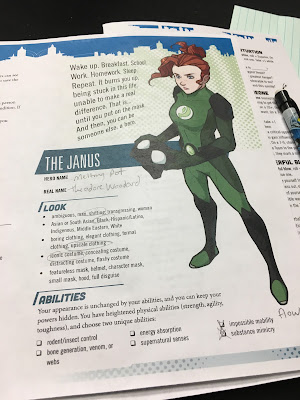 We spend the rest of the evening checking out board games from the con's board game library. I like trying games I haven't played before, and usually find something I like enough to eventually add to our own collection.

This first one we tried was Macroscope. The goal is to be the first to identify a drawing through small holes that each player reveals in turn. I stunk at this game. It was still pretty fun, but I think I'd like this one better as a video game, because adding and removing the tokens covering the holes each round, and having to carefully slide out the drawing when it's revealed, were both tedious acts of manual dexterity.


Then we played Hoard, in which you compete to steal as much of a dragon's treasure as you can before he wakes up. I wasn't amazingly horrible at this game.


That's it for day 1, though I want to show off how my wife was the star of the show with her new meeple earrings... 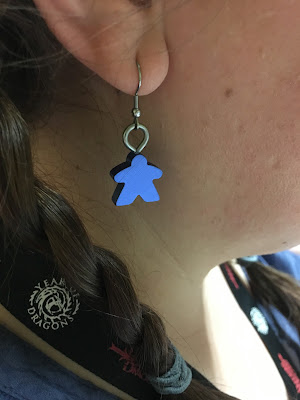 Watch for my Day 2 update tomorrow...