Gen Con 50 was amazing! I wanted to share my notes on the seminars I attended. Here's the first, the main Monte Cook Games seminar. You can also watch the seminar yourself!

Invisible Sun is expected to ship in March 2018. MCG had a separate seminar for this game. The game will include lots of handouts, such as business cards, letterhead, and other tactile stuff. A mockup of the game box and some of its contents (including a map, some of the cards, and the creepy hand that holds them) was available for viewing and caressing at the MCG booth in the Exhibit Hall.

"Cypher Play" is the MCG demo program. For more info, talk to Darcy Ross. The program will feature three seasons per year, and they'll be short ones. The first is a Cypher System fantasy campaign by Bruce Cordell. Players are encouraged to tell their local game stores that they want to see this, because this program is driven by store participation. The adventures are free, and a copy is provided for each player (not just each GM).

Shanna Germain talked about the "Cypher Guide," an upcoming online encyclopedia containing comprehensive info about Cypher System games. It will include page references and rules information for the games. It will be searchable and feature character creation, creatures, foci, types, etc. The Cypher Guide should be live soon. Will it feature 3rd party content? Shanna hadn't considered this, but said maybe.

Monte talked about the latest Numenera book, "Jade Colossus." It's his suggestion about what single book to buy after the corebook. The book contains step by step campaign creation and a Numenera ruin mapping engine.

Unmasked by Dennis Detwiller will finish the Worlds of the Cypher System trilogy, and is due in November 2017. It is a game of psychological horror and superheroes, featuring teens in the 1980s. Masks impart powers, but can also alter one's personality.

A Cypher System quickstart is coming in September, and will be free online.

Numenera 2: This was the big announcement! This will come in the form of two books: Discovery and Destiny, and will Kickstart in September (for probably $120 for both books in a slipcase). MCG has just started development on it. (Here's their announcement on the MCG website.) 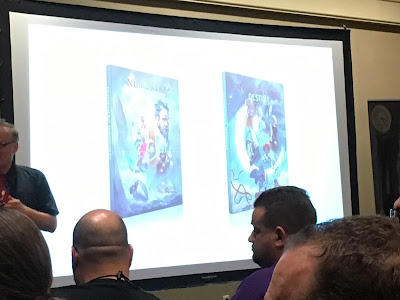 Discovery will replace the current Numenera core book. (Monte says they are "retiring" that book, which is now selling out from its 4th printing.) It's not an overhaul to the system; old books will still be usable. It will revise the character creation material, aiming to provide more and better character options. These options will provide more choices when tier-ing up. Monte says this kind of backward compatibility is possible because in the Cypher System PC rules are distinct from NPC rules. He promises a seamless use of old sourcebooks (such as the bestiaries) with the new rules (and vice versa--new bestiaries with the old corebook). He notes that old character options books will be "less useful" with Numenera 2, but the rest will remain useful. Also, the setting chapter might expand on locations that have been added to Numenera over time, such as the city featured in "The Poison Eater" novel.

Destiny will let PCs take discoveries and use them to do things such as build a new base, or vehicle, or help their community in some other way. It will include a crafting system, detailing materials and components with dozens of plans for building things. Destiny will let players be proactive and shepherd a community through long-term campaigns. Monte promises that you can "make your mark on the 9th world." Destiny will come with three new Types, plus new foci and descriptors. The game will also feature new community-related organizations. (FYI, Monte's favorite Numenera organization is The Convergence, from Numenera.)

Season 2 of Cypher Play--by Sean Reynolds--will serve as a sort of preview to Numenera 2. Numenera 2 will keep some of the iconic art from the original, but will mostly feature new artwork. The Kickstarter will have a narrative element, involving a community under threat; more backers means more defenses and resources for the community, and this community will become a part of the 9th World. Monte noted that Numenera 2 won't push any "story" forward in time, because the game doesn't involve a meta-plot. Monte also asserts that Numenera 2 represents growth for the game.