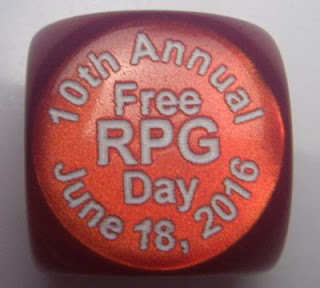 This year marks the 10th anniversary of Free RPG Day, and somehow it’s the first time I took part in the event. I guess the main reason is that, where I live, there’s not a lot of publicity for the event. Okay, that’s an understatement. You’d have to specifically ask someone who knows about it, because I never did see any signs put up in a game store or notices posted online.

Anyway, my friend Jeff told me about this year’s event at Mid-South Hobbies and Games, so I eagerly attended. The event at this store was run by a local gaming group called FORGE, and they recruited GMs for two time slots that day. Each 4-hour slot offered several games, and I picked Mutant Crawl Classics and Night’s Black Agents. 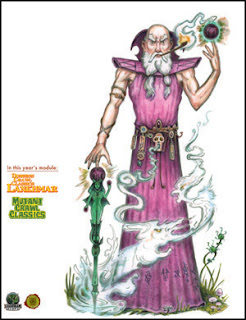 Jeff’s son Parker ran The Museum at the End of Time, a Mutant Crawl Classics adventure by Jim Wampler. I’m excited about this game—it’s the forthcoming far-future post-apocalypse game from Goodman Games, a companion game to Dungeon Crawl Classics. In this preview adventure, we played 0-level tribespeople who discover the titular museum and encounter its guardians, artifacts, and mysteries.


Though it was Parker’s first time running a DCC-related game, he did a good job. We had about a 50% death rate, which isn’t bad for a game like this, though most of our deaths came from trying to understand artifacts we found. (You’d think we’d learn our lesson after a while, but our main objective was to identify artifacts and bring them back to our village.) 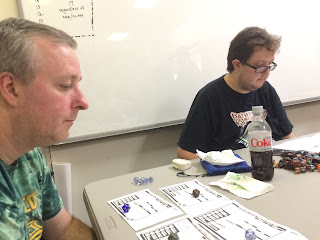 My favorite thing was our weird character types. Besides pure humans, we had mutants, manimals (including one buffalo-man and a frog lady), and plantients. Judging from the layout of our character sheets, I suspect that characters in this game will be able to acquire more mutations after character creation. I hope so. Mutations are fun. 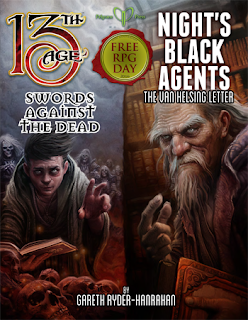 For our other session, Jeff ran The Van Helsing Letter, a Night’s Black Agents adventure by Gareth Ryder-Hanrahan. This was my first exposure to the Gumshoe system in play. (I’d read Trail of Cthulhu, but hadn’t played or run a game using the system.) The players took the roles of modern-day espionage agents trying to track down something valuable left behind by Van Helsing—something that might help in a struggle against a strange kind of vampire.


You know, sometimes you get a great group of players who really work well as a team, make smart decisions, and get the mission done without a lot of arguing, missing clues, and wasting time on unimportant activities.

Anyway, this adventure had an interesting story. I learned later that GRH designed it in a totally open-ended way, providing sections on the characters, locations, and situation, but without providing scenes or encounters, intending that the GM and players drive what happens where, and leaving it up to the GM to decide which elements were true and which were red herrings. (Mmm, red herring. That’s what we had.)

In addition to the gaming, I won raffles for a Free RPG Day 6-sider and a set of cool green dice! I’m proud of the 6-sider, because the first time I rolled it, it gave me enough damage to kill a sentry robot. Sweet! 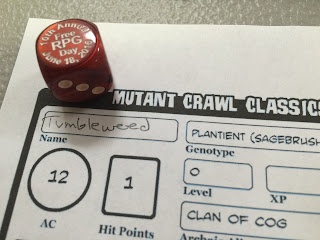 They also gave out cleverly-themed pencils... 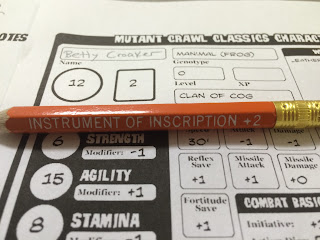